Unfortunately, yesterday we saw President Biden use the word "Armenian genocide" in his speech on the occasion of the 106th anniversary of what happened during World War I.

The historical fact is that during the First World War, the Armenian minority living in Anatolia, North and South Azerbaijan, at the instigation of some powers, revolted for establishment of Greater Armenia and massacred large numbers of Muslim Turks from Quba and Baku to Yerevan, Urmia, Kars, Erzurum and Marash. Therefore, the Turks of Azerbaijan and Anatolia were forced to defend themselves, and at that time, unfortunately, a large number of people from both sides lost their lives. Eventually, the war-torn Ottoman government was forced to implement a policy of forced migration of the Armenian population living in war zones. However, the Armenian population living in the western parts of Anatolia was not included in the policy of forced migration and was not disturbed. It is clear that if the policy of genocide was to be implemented, the Armenians of western Anatolia would also have to be attacked in principle.

Unfortunately, this is not the end of the story. During the following decades, the policy of expelling Azerbaijani Turks from Yerevan and Karabakh provinces continued until not a single Azerbaijani was left in the historic province of Yerevan. Armenians continued their hostile policies. After the collapse of the Soviet Union, by massacring and looting, they expelled one million Azerbaijanis from Karabakh and seven neighboring regions and committed heinous crimes such as the Khojaly massacre. They refused to evacuate the occupied territories, which was eventually freed by the Azerbaijani army only by force.

The governments of Turkey and Azerbaijan have repeatedly stated that they are ready to open all their archives so that multilateral scientific groups can conduct scientific and impartial research on this subject. But the Armenian side has always shrugged off that. Undoubtedly, President Biden's political move will only result in the intensification of the occupation, belligerent and anti-other policies of the Armenian lobby and the Armenian government, and will not be able to overshadow the unity and brotherhood of Azerbaijan and Turkey.

If President Biden seeks justice and non-repetition of genocides, why not confront the history of his country, which completely genocide the Native Americans, before judging others ?! Also, if you want justice, why don't you see today the 35 million Azerbaijani Turks of Iran who are systematically subjected to cultural genocide and economic and political colonization?!

Certainly without regard to these facts and a comprehensive and fair view; A unilateral, biased and political approach to the issue will not help resolve the issue. In our view, this view of the issue of judgment is one-sided and unrealistic.

We, the parties and organizations of South Azerbaijan, which signed this statement, express our dissatisfaction with this political and unrealistic attitude, condemn it and call for its correction. 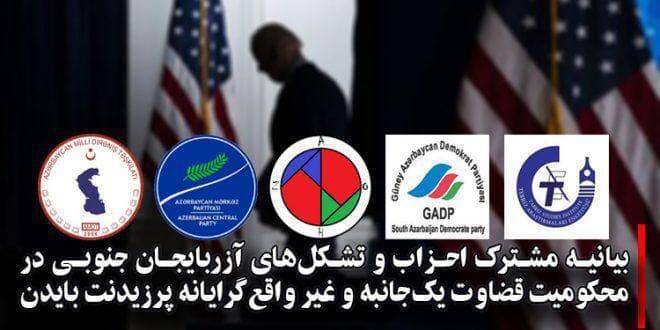